you will be hearing lots about Jess Brown.

from her Fall Fashion Week 'debut' with Bottega Veneta (see September post on this blog), to her February feature in Martha Stewart Living, to the launch of her womens and home design collections  'bits & pieces'  in March, to a soon to be aired Today Show story, Jess is having a moment, or two or three.....

along with the haute hullabaloo also come the overwhelming ooh la la's surrounding the charming book Kiki & Coco in Paris,  launched in late 2011.

it does not take a bite into a madeleine for me to recall the precious party with Jess held in Washington, DC in October but how fun to have her right here on NYC turf for a day!

just a hop and a skip from the Christopher Street subway stop and a walk over to Little Marc Jacobs last Thursday and there they were, "les collaboratrices":  photographer Stephanie Rausser; 'star' of the story Kiki; co-star of the story, the one of a kind doll Coco;  Jess Brown herself; and author/publisher Nina Gruener, lined up in a neat row behind a child's height table, looking like school girls, or dare i say, much like dolls...

super chouette! Vogue Bambini blogger and California groupies were in attendance, too! and quite the doll entourage in prime window seat locations! 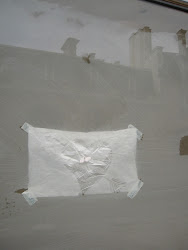